Bayern Munich continued their fine form in the Bundesliga by registering a breathtaking 4-0 win over a relegation-threatened Hannover 96 at the HDI Arena, closing the gap on league leaders Borussia Dortmund to just six points.

Joshua Kimmich set the tone for the game after 63 seconds by scoring a sublime volley following a half-hearted clearance from Felipe, and Bayern Munich’s other full back David Alaba went one better by doubling their lead with a rocket into the top corner after half an hour. Serge Gnabry got his name on the scoresheet early in the second half, although the Germany international did need a slice of luck to have a second bite of the cherry and eventually score after his first effort was blocked by Kevin Wimmer.

Kimmich proved decisive in Bayern Munich’s fourth goal by keeping the ball alive to tee up Robert Lewandowski, who nodded in the simplest goal he’ll score all season to round off the scoring in Lower Saxony.

Bayern Munich looked back to their best on Saturday largely thanks to their persistence with pressing from the front. This kept Hannover pegged back in their own half for the majority of the match, mitigating any threat that the hosts could have possed. On top of that, the Bavarians were incredibly sensible in possession. Niko Kovač’s side made their chances count when they came around, and Bayern Munich were only denied a bigger scoreline thanks to an impressive performance from Michael Esser.

He might not grab the headlines, but Bayern Munich’s only irreplaceable player right now seems to be Thiago Alcântara. He’s known for his creativity and flair, but the Spaniard’s role in the heart of their midfield proved impossible for Hannover to deal with on Saturday.

This pass from Thiago tho, mans not human. 🎩

Everything good that the visitors were able to muster came through the former Barcelona star, with his range of passing opening up Hannover with ease. On to of that, Thiago’s close control allowed his to escape an danger in possession and he did more than enough defensively too.

French winger Kingsley Coman looked off the pace against Hannover, although that can be forgiven considering the former Juventus star has only recently returned from injury. 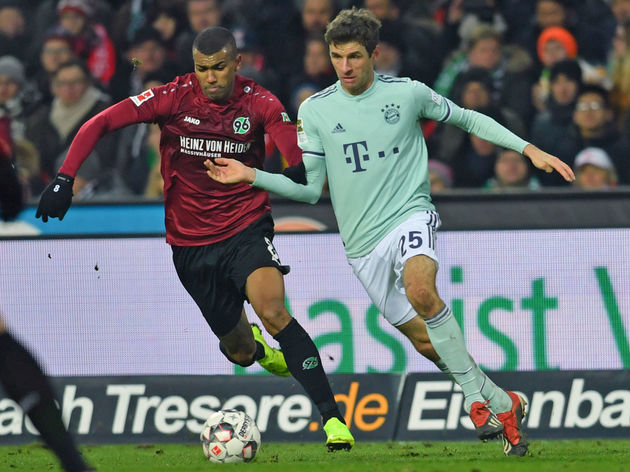 Thomas Müller, on the other hand, put in yet another disappointing performance – not his first of the season – at the HDI Arena. The Raumdeuter wasn’t on the same wavelength as his teammates and wasted a handful of good goalscoring opportunities throughout. Bayern Munich have two must-win games in the pipeline before the winter break, where they’ll host RB Leipzig before hitting the road to take on Eintracht Frankfurt.

Hannover, meanwhile, will be looking to claw their way out of the automatic relegation places when they take on SC Freiburg and Fortuna Düsseldorf.