The first half was as boring as football gets, with nothing of note taking place at all – and both teams looked relatively devoid of any sort of creativity. Norway had the best chance when Omar Elabdellaoui failed to control a cross at the back post. 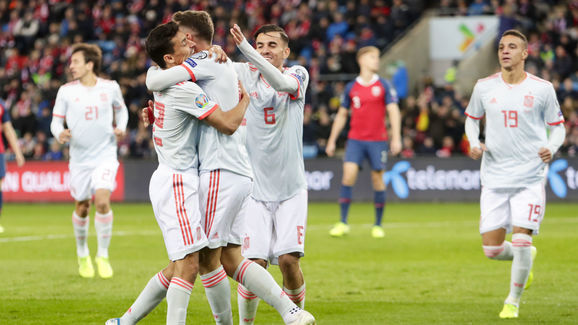 Spain looked far from their best throughout this game – and subsequently lost their 100% record as ​Josh King kept his nerve in the 94th minute to draw Norway level.

Still, Spain can take positives from this game. If England’s failing midfield needed any sort of example to follow, they should look no further. Saul, Fabian and Busquets looked like a tried and true midfield trio, but Spain will need more in the final third if they are to seriously challenge in next year’s tournament.

​Meanwhile, it was a big night for Spanish captain Sergio Ramos as he became the most capped player in Spanish history; surpassing former Real Madrid teammate Iker Casillas.

In a real midfield battle, Spain’s goalscorer Saul stood out. He was part of a three-man midfield which really clicked; Fabian having one of his best games in a Spain shirt as he looks to cement a spot in the starting XI.

Saul opened the scoring in the game with a well taken half-volley which beat Norway goalkeeper Jarstein.

Top performance against a top team from a top player.  pic.twitter.com/ToEHhMc6HV

Spain can confirm their place in next year’s tournament when they travel to their closest Group F rivals in Sweden next week. Three points against the Swedes would see Robert Moreno’s men qualify at the top of the group.

The Spanish might look to use the depth in their squad in that match, with players like ​Santi Cazorla, Pablo Sarabia and Thiago pushing for first team spots.

Norway, meanwhile, sit four points from qualification with just three games left and face a tough task to qualify. They travel to Romania next week, looking to close the gap.