Paulo ​Dybala’s sublime free kick was the difference at the Allianz Stadium as Juventus edged out Atletico Madrid 1-0. Here’s 90min‘s breakdown of the game.

The Allianz crowd witnessed two distinctly different Juventus sides on Tuesday, the attacking force of the first half and the resolute defensive unit of the second.

Their domination of the opening 45 was all about the movement of their front three, with Dybala and Ronaldo finding space in the wide areas and Aaron Ramsey joining them in support. The only criticism could be that intensity was lacking in forward areas, understandable given that ​Juventus‘ progression was already confirmed. 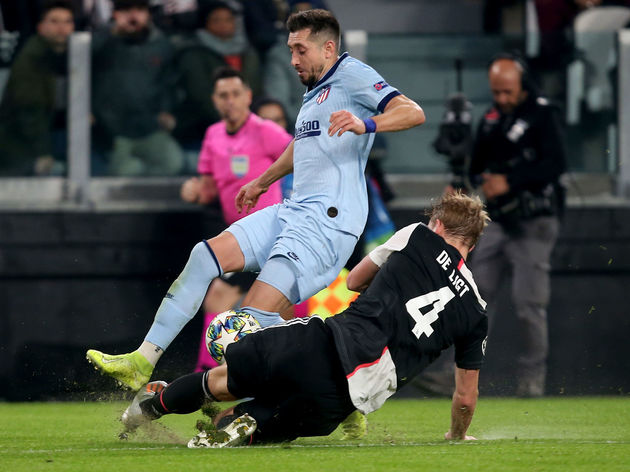 As Atleti roared out of the traps, the second half was all about the Old Lady’s defensive capabilities – the collective certainly rose to the challenge.

Juventus fans must be thanking their lucky stars that Paulo Dybala’s proposed move to Tottenham fell through – as the Argentine was world class on Tuesday evening. He plucked the ball from the sky effortlessly on two first-half occasions, much to the delight of the Allianz Stadium, before producing a back-heeled nutmeg to embarrass Mario Hermoso. When the Old Lady won a free kick on the brink of half time, the angle seemed impossible for a strike on goal. Such is the current confidence of Dybala that he whipped the ball in with enough precision and pace to incapacitate a goalkeeper of Oblak’s quality.

It wasn’t simply about those moments of magic, Dybala’s movement off the ball and link up play were a joy to watch at times. Sarri’s midfield diamond allowed the Argentine the freedom of the flanks and he drifted into excellent wide positions to create space. This movement was at the heart of some excellent pass-and-move passages with Ramsey and Ronaldo.

Dybala has been absolutely incredible. This is one of this best games I’ve ever seen, that touch, that nutmeg and now the goal INCREDIBLE

One of the goals of the season, seriously sensational from Dybala.

Los Rojiblancos have now failed to score a first-half goal in 13 of their last 16 fixtures, and they simply didn’t show enough attacking intensity in Tuesday’s opening 45 minutes. Simeone’s game plan focused on frustrating Juve by being compact, but all of their hard work was undone by Dybala’s wonder goal. Atleti dominated the opening 20 minutes of the second half and their fans must have been so frustrated that this desire or intent wasn’t on show before the interval. El Cholo essentially admitted that he’d got it wrong by making all three substitutions in the same 20 minute period.

Despite an improved showing as the game wore on, Juventus were able to protect their lead and limit Atleti to plenty of shots from distance.

In all honesty, ​Los Rojiblancos were lacking a star player on Tuesday evening. The first half was a solid team display, and the second saw attacking substitutes trying to create some fluidity against the clock. However, Thomas Partey certainly put in an admirable midfield shift. The Ghanaian’s tenacity to win the ball back was at the heart of several failed counter attacks in the first half, while his eye for a pass almost set Atleti on their way on other occasions.

Sassuolo and Lazio await Juventus in Serie A, ahead of their final Champions League group fixture away to Bayer Leverkusen.