Mancini went to Euro ’88 as a player and was also part of his country’s squad at the World Cup on home soil in 1990. He was noted for his 15-year spell at Sampdoria, striking up a partnership with Gianluca Vialli and helping deliver the club’s only Serie A title in 1990/91. 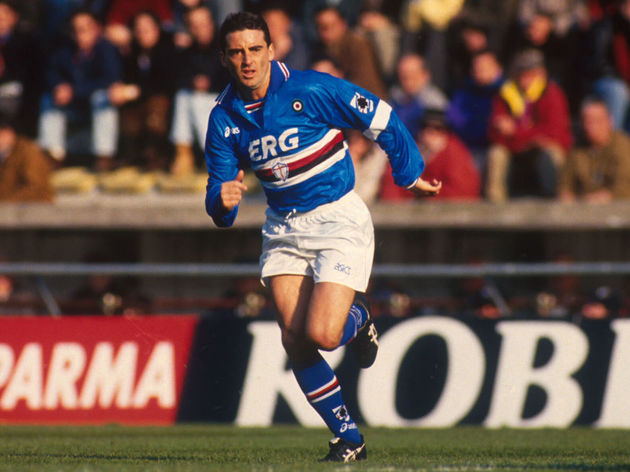 Even from a relatively young age, Mancini was set for a long-term career in management, taking on many roles beyond an average player at Sampdoria – he was even part of the panel that interviewed Sven Goran Eriksson for the job and would personally approach transfer targets.

When his playing career came to an end in 2001 following a four-year stint at Lazio and very brief loan in the Premier League with Leicester, Mancini was given special dispensation to take over as Fiorentina boss before completing the necessary coaching badges.

His pamphlet titled Il Trequartista published that same year examining the role of an attacking midfielder remains in the dedicated library at Italy’s national training centre. Mancini’s first two managerial appointments at Fiorentina and Lazio were plagued by financial difficulties, but he landed the Inter job in 2004. There, he oversaw a period of domestic dominance, but was sacked at the end of the 2007/08 campaign, having declared during the season that he wanted to step away, before rescinding his comments.

He was hired by an ambitious Manchester City in 2009 to deliver on the club’s targets for success, delivering landmark trophies in each of his first two full seasons in charge.

After leaving Manchester in 2013, Mancini spent most of the following season in Turkey with Galatasaray and oversaw rare progress to the Champions League knockout stages. Then came a disappointing return to Inter and a short spell in Russia. Mancini was appointed Italy boss in May 2018, the national team’s first permanent coach since predecessor Gian Piero Ventura oversaw failure to qualify for the 2018 World Cup. Despite financial pressure, Mancini won the Coppa Italia with both Fiorentina and Lazio, adding to the four times he won it during his own playing career.

Aided by the Calciopoli scandal and Juventus’ relegation, Mancini’s Inter won Serie A in 2006/07 and 2007/08, the club’s first league titles since 1988/89. They were also awarded the 2005/06 title that had been stripped from Juventus, as well as twice winning the Coppa Italia.

At Manchester City, Mancini’s FA Cup triumph in 2010/11 was the club first major trophy in 36 years, while the dramatic 2011/12 Premier League title ended a 44-year wait for league success.

Another national cup, the 10th of his football career as a whole, came during Mancini’s short time at Galatasaray in 2013/14. Having shockingly missed out on a place at 2018 World Cup, Italy became only the second team to secure a place at Euro 2020 under Mancini’s guidance.

Italy and Belgium were the only nations to emerge from the qualifying campaign with a perfect winning record. The Azzurri only conceded four times in 10 games and scored 37 of their own – Andrea Belotti top scored with four, while Nicolo Barella, Ciro Immobile, Lorezno Insigne and Jorginho all netted three each.

Italy have been drawn into Group A for the final tournament and will face Turkey, Switzerland and Wales in the opening round, with all three games at Stadio Olimpico in Rome.