The 1990 World Cup is one of the most memorable tournaments for England supporters. A dramatic run to the semi-final, Gazza’s tears, and of course, inevitable heartbreak.

Euro ’92 is also one of the most memorable tournaments in the Three Lions’ history – but for much more humiliating reasons.

The mood surrounding the England camp of 1992 was not a pleasant one, and although expectations were high, there was an overriding sense of dread going into the tournament. 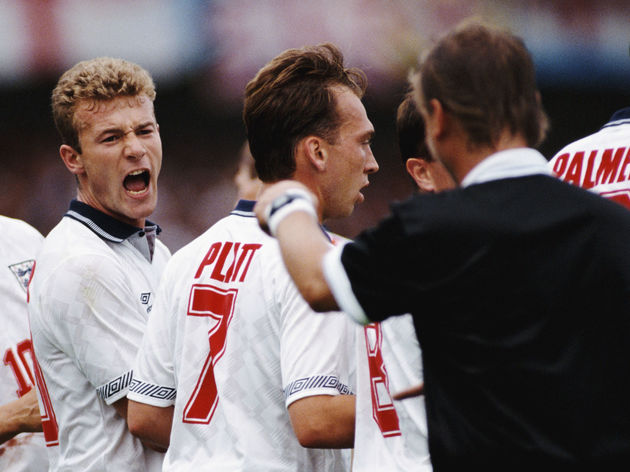 As for Sweden, they were the host nation for the tournament, and given their poor showing in Italy two years prior, not much was expected of these underdogs. And so the pair were drawn against each other in Group 1, and with England managing only two draws in the opening two matches, the hosts knew qualification was in their grasp.

The home support was in fine voice for their plucky heroes, but they were soon stunned into silence. England took the lead inside five minutes, when Gary Linekar’s pinpoint cross found its way to David Platt, whose mis-hit effort found its way into the far corner of the net.

The Three Lions maintained their advantage until the half-time break, keeping the Swedes at bay without really causing too many problems of their own. But if England thought they had one foot in the next round, then they were quickly brought back down to earth with a bump as the second half began.

No matter the level, the quality or even the era of football – if you switch off from a set-piece, you will get punished.

Sweden had shown their aerial prowess from corners in their draw with France earlier in the competition, and they pulled off a similar routine on 51 minutes against England. An away-swinging corner from Stefan Schwarz arrived to the penalty spot, and Jan Eriksson was waiting to power home a low and unstoppable header.

Suddenly, the Swedes were in their absolute element, and England were on the ropes. Sweden dominated proceedings for the entirety of the second half, rattling England so much so, that boss Graham Taylor took off his captain and striker Linekar. A costly move.

The hosts continued to push, and as the minutes ticked by, there seemed to be only one winner. And so it came to pass, as a moment of magic from Swedish talisman Tomas Brolin gave the European audience one of the greatest goals in the tournament’s history.

Brolin picked up the ball on 82 minutes, and after wriggling clear of some weak tackles, the forward laid the ball into Klas Ingesson’s path, who rolled it into space for his teammate to chase.

With the ball back at his feet, Brolin looked up, assessed his options, and played a second give-and-go – this time with Martin Dahlin – whose bobbling pass found its way back to the feet of the number 11 just inside the England penalty area.

Brolin ran onto the ball at full speed, and whilst under pressure from three fast-approaching defenders, produced a sumptuous finish, stroking the ball home with the outside of his right boot. The shot flew beyond England goalkeeper Chris Woods, caressing the top corner, and the Swedish supporters rose as one to applaud their young superstar.

With their Euro dreams hanging in the balance, England tried to find a way back into the game, but ultimately they could not break down the impressive Swedish backline.

The final whistle was met by scenes of incredible celebrations, as the unlikely underdogs secured a place in the semi-finals in front of their own fans, whilst England were sent home with their tails between their legs.

8 Vintage Nike Football Shirts Liverpool Should Base Their Kits on...

How Leicester’s Loaned Out Players Will Get on When They Return...